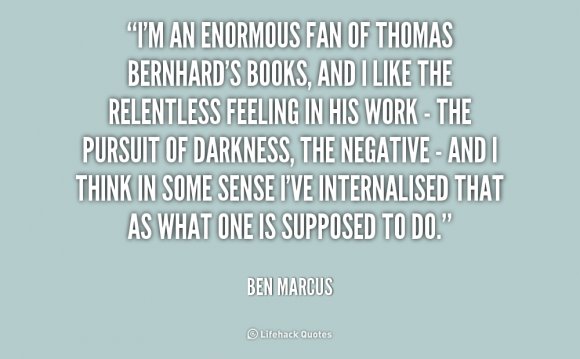 Thomas Bernhard’s first book Frost is (unless I’m mistaken) his longest, and of the number of I’ve today read, the absolute most taxing from the reader—bitter, caustic, depressive, nihilistic.

it is also very funny, the storyline of a new physician hell-bent on making a profession for himself just who heads toward remote town of Weng to spy on Strauch, “the artist, ” on the behalf of Strauch’s sibling, who can presumably further the narrator’s health profession. The artist, long-estranged from their family members, his health deteriorating, life (if it may be called that) in a vile inn at the bottom of a gorge. The painter’s sibling dispatches the narrator to report in the minutest detail: “Watch just how my cousin holds his stick, I want an exact information from it.”

a word we discovered reading Frost: “knacker.” A knacker is somebody who renders, buries, or otherwise dumps dead animals. The knacker of Weng is one of the main figures of Frost. He’s having an affair using innkeeper, a symbolically overdetermined story product (in a basically plotless guide) that thematically ties demise to hearth. Frost is savagely morbid, its empty white snow an ideal canvas for Bernhard’s bloody strokes. The abject physical violence of their next book seems processed in comparison to the brutality of Frost. The artist declares that “the abattoir may be the only really philosophical location. The abattoir could be the class and also the lecture hall. The only wisdom is abattoir knowledge!” Frost is an abattoir.

Frost can be a stage play of sorts—like others Bernhard books I’ve read, it will require anything of the type through the conventions drama: minimal units, just a number of characters, and dialogue that always veers into monologue. Through the length of the novels, these monologues (usually delivered by an obsessive, sanity-challenged older guy) fundamentally ventriloquize the ostensible narrator/auditor, a stand-in for the reader’s very own consciousness. Bernhard styles, builds, destroys, then rebuilds these consciousnesses; whenever artist of Frost declares which he has actually learned “perspectivelessness . . . because i will be therefore high in various views, ” he offers us a condensation of Bernhard’s analysis of first-person perspective and its attendant imaginative capacity as simultaneously innovative and destructive.

Certainly, as novelist Ben Marcus points out in his summary of Frost:

Bernhard is an architect of consciousness a lot more than a narrative storyteller. His project is certainly not to reference the known globe, stufﬁng it with completely rounded characters whom commence to find their particular disputes with one another, but to erect complex states of mind—usually self-loathing, obsessive ones—and then go about destroying all of them. Bernhard’s characters tend to be comprehensive accomplices in their own personal destruction, and are bestowed with a language that is dementedly repetitive and besotted using appurtenances of rational thinking. The devious rationality of Bernhard’s language strives for a severe expert, and it also can make their characters appear believable, no matter what unhinged their statements. Phrases don’t get duplicated plenty as needled until they yield graver definitions, with incremental modifications introduced like a deranged scientist had been including and removing substances into the performance of an experiment.

We can’t do better than Marcus, and Frost is just too lengthy a performance to use. I shall say: Gargoyles or The Loser are most likely better initiating places for the people enthusiastic about Bernhard’s work. This recommendation is not designed to slight the book at all—but it can look over somewhat like an initial book, sporadically weighed down by (the things I perceive becoming) its authors need to state it all, everything, here and from now on. Naturally, Frost functions prose-passages that any first-time novelist will be happy (and most likely terrified) to own inside their debuts; I’ve featured a number of on the site currently.

But this might ben’t really analysis Frost. A suitable evaluation of Bernhard would take the time to function with their language. We noted plenty in Frost, highlighted plenty passages that I’m not really sure how to begin synthesizing it.

My preliminary thought would be to dodge all of it through a sarcastic post, a parody regarding the alleged “listicle, ” those non-articles that seek to boil a-work down to a digestible (and forgettable) summation of estimates, often using the intention of offering the audience a modicum of self-help (in pretense of “wisdom”). Something similar to “Forty Inspiring Quotes from Thomas Bernhard’s Frost” or “Timeless Wisdom from Thomas Bernhard” or some these types of nonsense. Anyhow, another area, VII, includes 40 citations from Frost, mainly excellent one-liners too-good never to share. I’ve enumerated them and lumped them into one big block quote; they've been listed in your order they show up inside text. I do believe they offer an agonizing and funny summary of the book.