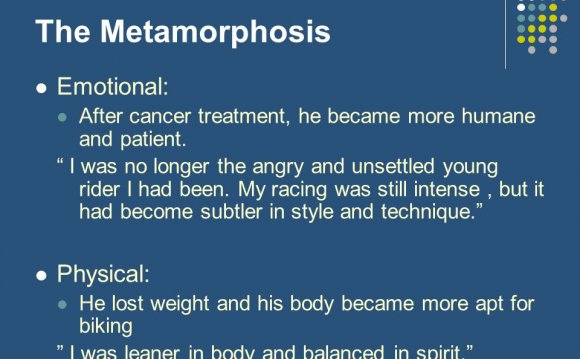 Yes, we're conscious that calling Kafka "sophisticated" and "ironic" at the same time tends to make him appear to be he's for some reason wearing a monocle, a supper coat, an 80's wolf-howling-at-moon t-shirt and some cowboy boots all at exactly the same time.

Even though Kafka ended up being a weirdo, he wasn't an affected weirdo. He was just full of surprises.

Listed here is a great word to dazzle your English teacher with: anacoluthon. An anacoluthon is a sentence that ends in a surprising or unexpected means. Take the first-line of Kafka's Metamorphosis: "whenever Gregor Samsa woke up one early morning from unsettling aspirations, he discovered himself changed"—okay, ordinary enough—"into a monstrous vermin."

A monstrous vermin?!? which wants everything even worse than bed tresses and morning breath once they awaken, let alone becoming turned into a bug? Kafka's design actually loaded with difficult vocabulary, but you'll notice that his sentences appear to just on until they end with a few surprising or counter-intuitive twist.

Metamorphosis of the Butterfly